Have you ever heard of the TV show Wentworth before?   If you haven’t, then today is your lucky day.   I am going to talk about the Wentworth TV show cast and everything about this spectacular show.   In my mind this TV show is the best show on TV for the past decade.   Once I am done, you will definitely want to be checking it out on Netflix.

If you think this little prison show is just like every other prison drama show, you are MISTAKEN!   This show has taken the prison setting and combined it with amazing cast members and incredible story lines that will blow your mind.

When a show can continue to grip your attention year after year, they are clearly doing everything right.  That can only happen when you have an amazing cast.

The show Wentworth is actually a reinvention of an old Australian soap opera called “Prisoner: Cell Block H”. Airing for 8 seasons from 1979-1986.

The remake of this prison drama, has been on TV for 7 complete seasons and still going.   It’s original debut was on the SoHo Australian TV channel on May 1, 2013, and was commissioned for TV by Foxtel TV management.

Although Wentworth was considered a remake of the original show “Prisoner”, executive producer Brian Walsh of Wentworth said this:

“Wentworth will be a dynamic and very confronting drama series, developed and stylised specifically for subscription television audiences. We have told producers to push all boundaries and honestly depict life on the inside as it is in 2012”.

With this commitment, the show and everyone involved has committed to creating a new fresh look at women in prison in Australia.   It covers the struggles that the women encounter in prison, the danger, and even the politics that actually take place inside a prison full of women.

Wentworth Correctional Facility delves into the dark way of life in prison for female inmates.   From prisoners that are serving life, to first time offenders.   It’s gritty and violent, filled with beatings, murder, rape and so much more. This is a show that will keep you on the edge or your seat episode after episode.   The fight to be the leader in prison or “TOP DOG” as they call it is a huge part of the show.   A power struggle that carries through all 7 current seasons.

Unlike many drama shows, they also aren’t afraid to kill off a main character or two.   Just when you think that they won’t do something that dramatic in their story line, they are constantly surprising you.

The absolute main reason for the shows continuing success, is its ability to lose big characters, and replace them with ones that are your next favourite character.   This ever-changing cast, clearly knows what actors to bring to the show and either make you love them or hate them.   Even making you change your mind about a character half-way through.   The casting is phenomenal. 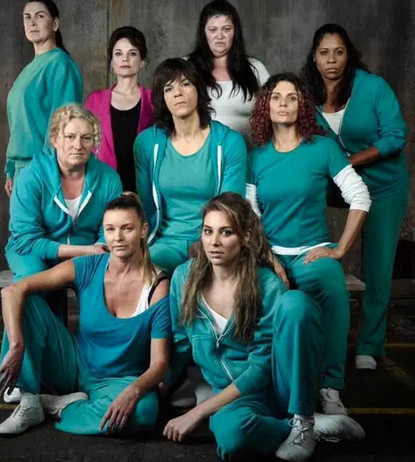 The first episode of the show, follows a first time offender named “Bea Smith” who has just been arrested for the attempted murder of her abusive husband Harry.  Once arrested, she is sent to Wentworth prison as a new inmate that is on remand awaiting her trial.

Her portrayal of Bea starts with her very first day in prison, and meeting the other girls in “H Block”. There is a huge struggle that she goes through to adapt to this new normal of everyday prison life.   Trying to manage staying safe, following the rules inside and just trying to keep her head down.

Which of course doesn’t work.

Bea’s daughter “Debbie” is on the outside, and she is what keeps Bea going in the beginning season of the show.   Bea quickly learns what prison life is all about and from that moment on, she never looks back.   Her character development throughout the show has her unrecognizable from the girl that first walked into Wentworth.   Her shy, sweet and mothering nature, ultimately turns into a struggle of how to be a good person and still do whatever it takes to stay alive in prison.

The character of Bea right from the beginning has you so drawn into her, making you feel sorry for her and causes you to always root for her.   To me her portrayal of Bea Smith, is what got people hooked on the show instantly. There is not one dull moment in the 4 seasons she is on the show.   She played Bea from 2013,-2016.

When she did leave the show, fans were crying and literally devastated by her departure, myself included.   The last scene she is in had me crying like a baby!   There was just something about Bea that made you love her.   Wait to go Danielle!!!

The character of Franky is a strong Lesbian character.   In the beginning of the show she is serving 7 years for throwing hot oil in the face of a judge of a cooking show she was on.  That act lands her a 7 year sentence. 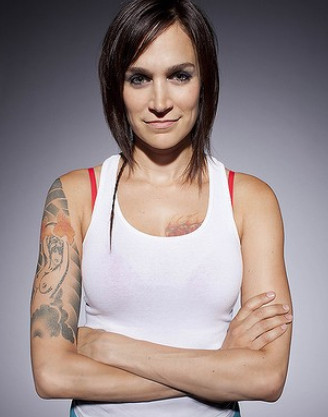 Franky’s character is flawed, conflicted and at times violent.   Her painful childhood back story, fuels everything that Franky does.   From fighting, being a drug king pin, to manipulating the ladies.   Her constant need to fight for the top dog position keeps everyone on their toes. “Jacs” the first season top dog is always trying to rattle Franky and get her into trouble.

Throughout Franky’s long run on the show, her character goes through many ups and downs.   Battling her past, trying to make it through her sentence and surviving long enough to get paroled.

One of Franky’s main love interest in the show happens a few years in and funny enough is the Psychiatrist at Wentworth.   Her name on the show is “Bridget Westfall” or as Franky calls her “Gidget”.   The character is played by Libby Tanner another amazing Australian actress. 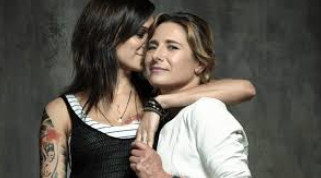 Their love story captivates fans, and is given the name “FRIDGET”.   Fans were so in love with these two as a couple that they created fan pages on twitter, tumblr and more.   Everyone is obsessed with these two including me.   I just couldn’t get enough of them.   Throughout their long run on the show, their popularity kept them as huge fan favorites on the show.

Franky’s character was so big, that even after leaving the show for different periods of time, kept popping back into the show, right up to the last new Season 7.   Her cameos keep us fans happy and every time we see her, we get our little Franky fix.

At the start of the show, the “TOP DOG” character is “Jacs Holt”.   Played by Australian actress Kris McQuade.   Her dynamic portrayal of crime matriarch Jacs of the Holt crime family.   In jail for murdering a man associated with the family business that had wronged the family. 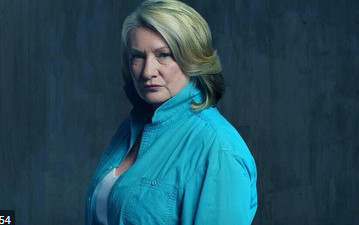 Her character was the main antagonist in the first season of Wentworth.   She was 7 years later, still the most hated inmate that went through Wentworth.

She was vicious, manipulative and truly lacked any type of compassion at all.   With physical violence and fear, Jacs along with her crew terrorized the women of the prison.   Nothing was off limits, and she was always pushing the boundaries of punishment.

The power struggle with her at the top, made her character fight every day to stay there.   With Bea and Franky pushing for her spot as “TOP DOG” she was always finding new ways to make them pay for their disloyalty.

Jacs was truly the first major villain on the show.   The first and not the last!

ACTION ….and now introducing Joan Ferguson aka “THE FREAK”!

The part of Joan is played by the fabulous Pamela Rabe.   A Canadian born actor who in 1983 moved to Australia which became her new adopted home country.

While living there she played many leading roles in some of Australian biggest stage plays.   She acted alongside some amazing and famous actors like Cate Blanchett.   Her unbelievable acting skills in every part she plays, literally makes other actresses shake in their boots.   Her amazing talent has made her one of Australias highest regarded actresses earning her a slew of top awards.

On the show, Joan’s character starts out playing the sadistic prison Governor for Wentworth Correctional Centre joining the cast in Season 2!   Through the seasons, Ferguson as she was usually called, become unhinged.   Her psychotic and demented need for control was unbelievable.

She would do absolutely anything to have everything in its proper place, have people follow her lead so far, that she ultimately became a monster. The character of Ferguson from each season transforms into something outrageous. Going from Governor to Prisoner to Top Dog through the seasons.   Her character will enrage you with what she is capable of and how she manages to get away with such sadistic and unsympathetic behavior.   Stopping at nothing to get what she wants.

I love this show so much, I could literally go through each cast member one by one.   Unfortunately, they have actors coming and going all the time, so I can’t possibly cover them all.

Along with the 4 stand out characters on the show, the supporting cast of actors and actresses is phenomenal.   As an example one of the few original cast members to still be on the show, the character of Vera Bennett, played by Kate Atkinson is spectacular.

She plays the Deputy Governor and Governor throughout the show.   Her character is as loyal as they come, extremely hard-working and yet completely vulnerable all at the same time.   She is so naive to the point that she continues to make the worst possible decisions.   Even earning the nickname “Vinegar Tits”.   Yup you heard me! You need to watch the show to figure out where that comes from.   HAHA! 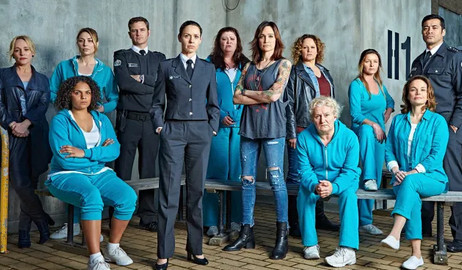 There are some other amazing supporting long time characters like Liz Birdsworth the alcoholic and peer worker.

Sue “Boomer” Jenkins who is the resident sidekick to Franky and whose loyalty is unwavering.   Her first reaction is to always crash and bang anyone who gets in her way hence the nickname Boomer!

One of the other wonderful characters that you at first hate, then love, is Karen “Kaz” Proctor.   Leader of the “Red Right Hand”.   An all women vigilante group, dedicated to wronging men who have abused women.

Her character really develops through the years.   Full of rage, the utter need for control and again a horrible childhood land her in Wentworth.   Watching her journey is really something to see.

All the wonderful, characters like: Mr. Jackson, Jake, Allie, Doreen, Fletch, Rita, Officer Miles and many more, are the reason that this show is my very top pic of shows to binge.

The entire Wentworth TV Show Cast could be written on this page, because they are all that good.   Tune in to find out what actually happens with each of these amazing characters on this unbelievable TV show.   With Season 8 just around the corner, this fan can’t wait to see it.

The word on the street is that Season 9 will be the last Wentworth season, but I truly hope that isn’t true.   Shows like this don’t come along every day, and it is so good, that you hate waiting to see the next new episode or season.

I hope you have enjoyed my post, and I would love to hear your thoughts on Wentworth, just comment below.