When I am telling a personal story about myself, I can’t help but talk about where I am from. When I describe myself, where I was born and grew up is a huge chunk of who I am.  So, with that, I think it needs to be talked about in detail. 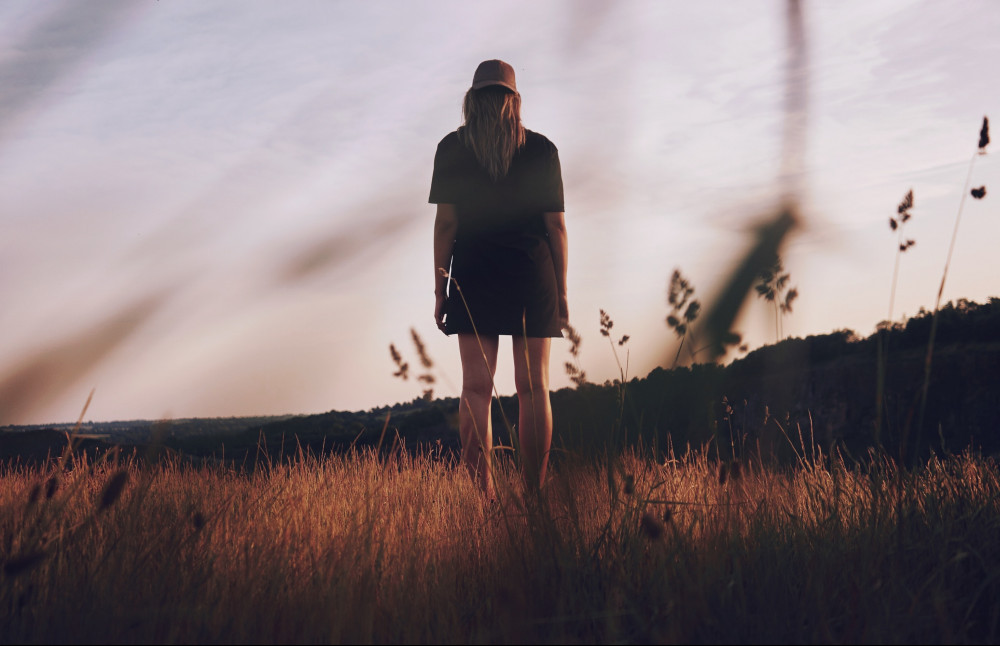 I grew up in the Prairies, so that makes me a Prairie Girl.   Really though, what’s a prairie girl anyway?

I believe it is a girl that grows up in the Western provinces of Canada.

Where are the Prairies?

To start telling this story, you first need to know where the Prairies actually are.   They are located in Western Canada and consist of 3 geometrically shaped provinces: Saskatchewan, Manitoba, and Alberta. They are the Canadian portion of the Great Plains of North America. 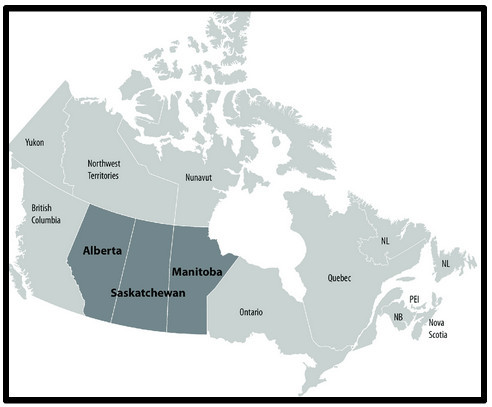 Known for their wide-open spaces of flat prairie lands and grasslands.  With wheat fields as far as the eye can see, this geography is utterly unique to the western part of Canada.

There are 3 types of grasslands that make up the prairies:

The prairies make up 90% of the country’s arable farmland and is huge in Canada’s agriculture sector.  Best known for planting fields of:  wheat, flaxseed, canola, lentils, peas, mustard, and oats. 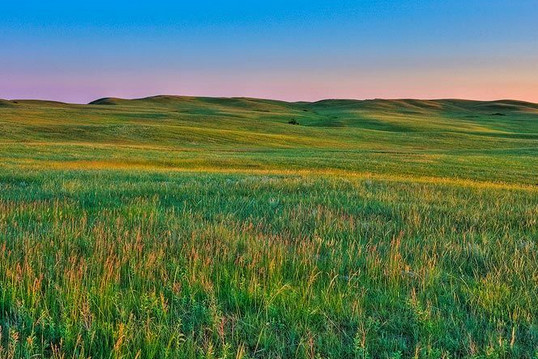 These provinces are often talked about as being rural, even though we have many large cities.  From the sky I have always found the landscape of the prairies beautiful and unlike anything I have ever seen before.  You can literally look for miles and miles, just due to the flat fields that make up these 3 provinces.

Weighing in at 6 lbs. 11.5 ounces, I came into the world a month early as a preemie.  Even though I was as preemie, I still came out with a full head of hair.  HAHA!!

My parents decided to name me Coralie June Neurauter.  A mouth full hey!! 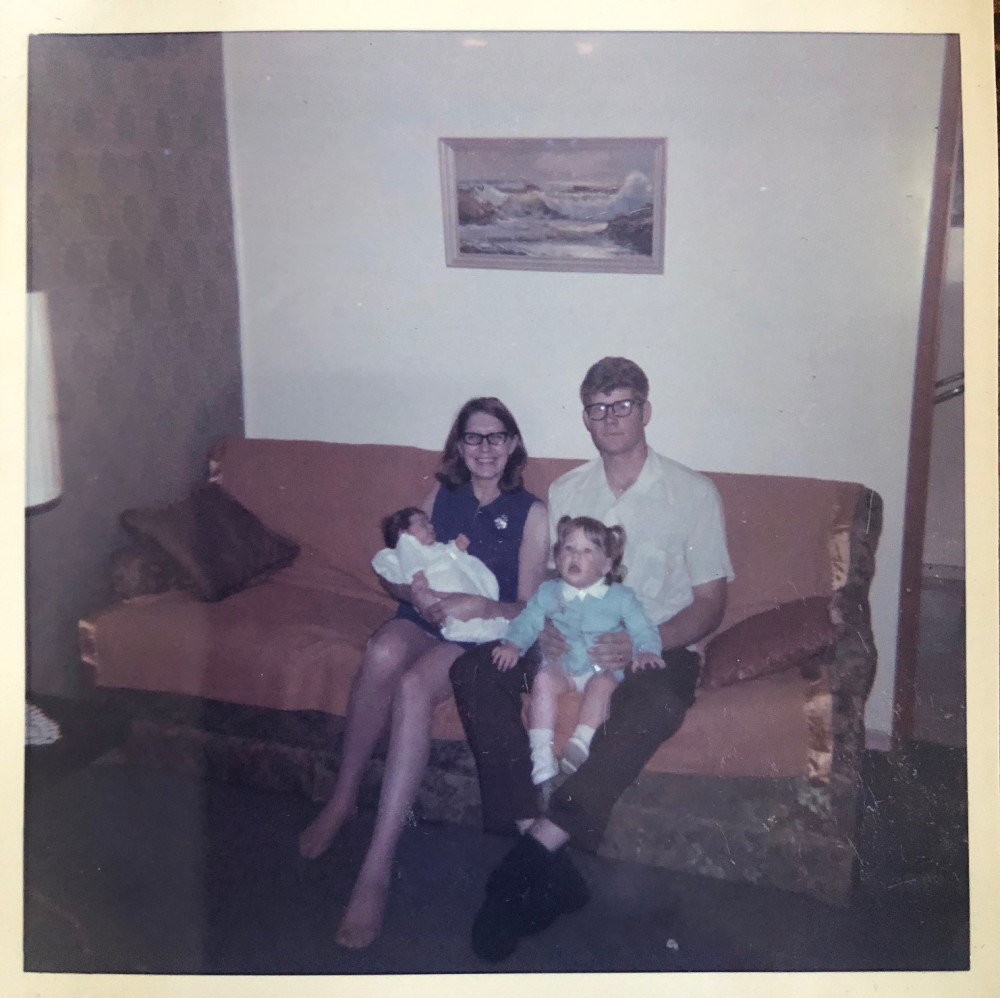 Being the second child, I am lucky enough to have my older sister Carey who is only 13 months older than me.  She and I have always been super close, often thought of as twins growing up simply due to the small age difference between us.

2 years later, my brother Jason was born, and that then made me the middle child of the family.

I was extremely lucky to have a sister and a brother, they both are super important to me in my life.  Siblings are the best.

To go from living in a city to a small rural town, was a complete life changing event for our family.  September of that year, I would enter Grade 1 at the catholic school in Spiritwood.

I think for us as a family this new way of life was extremely exciting, and really opened up our world to what it was really like to live in the rural Prairies. 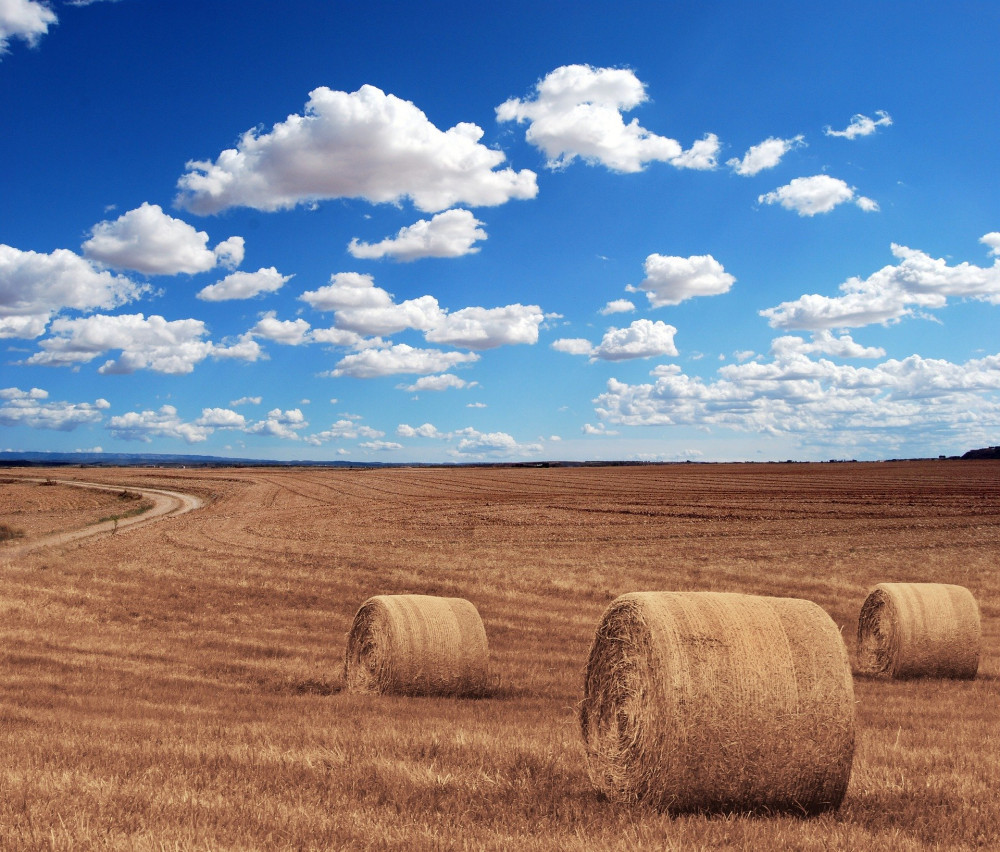 We were opened up to a world of outdoor adventures like living in a house where the backyard actually backed a slew.  YES, I am not kidding!  There were no houses behind us, and we were the last house at the end of the street.   Because of where our house was, we could literally put our ice skates on and go skating on the slew every day.

We could play hockey on the ice and with no fences to separate the houses, all of us kids in the neighborhood had an enormous outdoor play area.  The landscape of the prairies just gave us all the room we could ever imagine too enjoy. 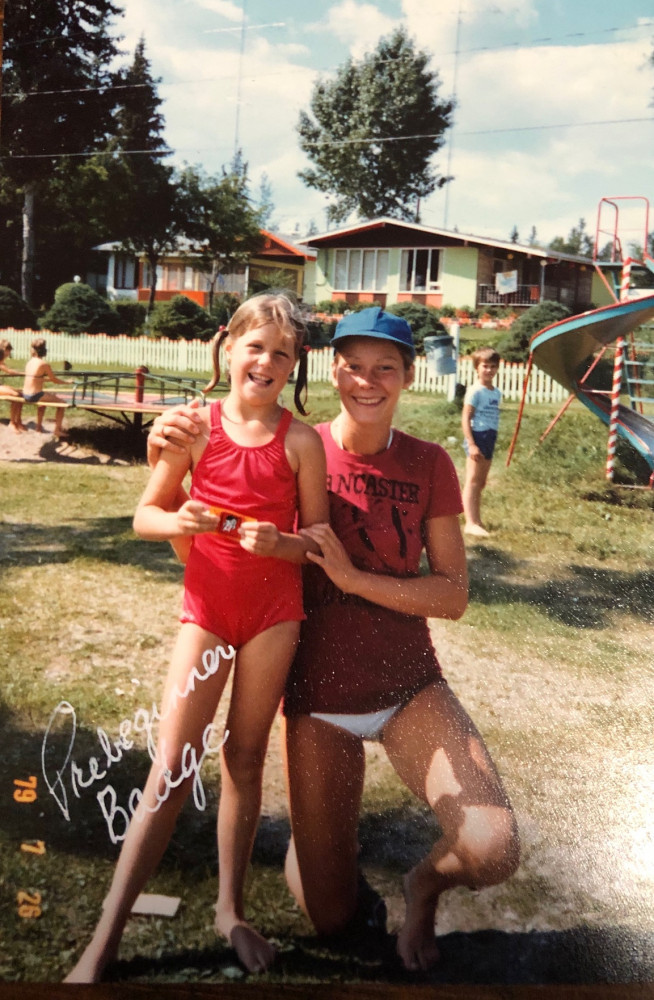 Surrounded by lakes all around, we spent our summers camping with friends and family.  It was truly a wonderful way to grow up.  I spent so much time out in nature, and outside, it was awesome.  I learned to figure skate, swim and even how to play guitar.  This small town was a great place to live.

Everyone knew everyone and you were literally friends with almost everybody in town.  A true rural prairie town.

A city girl is born

Sadly, in March of 1981, we were told by my parents that we were moving away from Spiritwood.  My dad had taken a new job in the big city of Saskatoon, which is the second largest city in Saskatchewan, with a population of 154,000 people in 1981.  In its own right, Saskatoon was and is still considered the prettiest city in Saskatchewan.

My siblings and I were absolutely devastated when my parents told us we were moving.   I just remember crying and begging them not to move us.  None of us wanted to leave our rural small-town life.  It was really all we knew to that point.  Especially because when we were moving to a city.

Moving to Saskatoon, I entered the Grade 4 class at Father Vachon Elementary School mid school year.  I remember that first day walking into class and getting introduced to the class as the new student.

Everything about Saskatoon was a shock for us.  All of a sudden, we were living in a house on a cul-de-sac with houses everywhere.  We lived on the west side of this huge city.  At least to me at the time, the city just seemed larger than life. 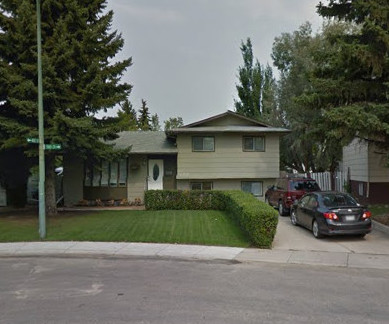 Even though this was major life change, I adapted pretty quickly and moved on from my grief of moving away from Spiritwood.

I quickly realized that living in the big city had some major perks.   I was able to start playing ringette, which was an all-girl organized winter activity much like hockey.  Remember back then there was no girl’s hockey at all.  The closest I could get was to play ringette.

I loved playing ringette and being part of a team.  That is where me and my sister met almost all of our new city friends.

Another thing that changed my life, was that we were able to get cable TV.   Unlike living in Spiritwood, where we got just 3 channels often referred to as “Farmer Vision”.  LOL!  Here we got way more cable channels.  Our TV world exploded!

Over the years, I absolutely fell in love with living in Saskatoon.  I lived in my same home until the early nineties.  I still think about that house a lot.  It was such a fantastic house to grow up in.

My high school years flew by and just like that I was an adult that got to decide for myself where I get to live.  Unlike many of my friends that left the province and in many cases the Prairies all together, I decided to stay here.  I got a job and eventually bought my own house.

It is funny at that time, I thought I would never leave here.  Jump ahead 25 years and that changed.

Adulthood and my connection to the Prairies

I discovered many things about myself once I became an adult.  Some of it I think comes from meeting new people as your world naturally expands.  I think once I started making friends outside of my area, my neighborhood, my side of the city and so on, I discovered how much growing up a Prairie girl was special thing.

Everyone comes from somewhere and hearing other people tell their stories and childhood memories made me realize that I was pretty darn lucky to be part of the history, pride and joy that comes with being from the Prairies.

Anyone that you talk to that knows someone from the Prairies will tell you that we are all tough, passionate, resilient, and a group of people that like to have fun.

We definitely live life to the fullest.  I mean c’mon we have some of the coldest winter months in Canada and we continue to just live life like somehow the weather doesn’t affect us. HAHA! 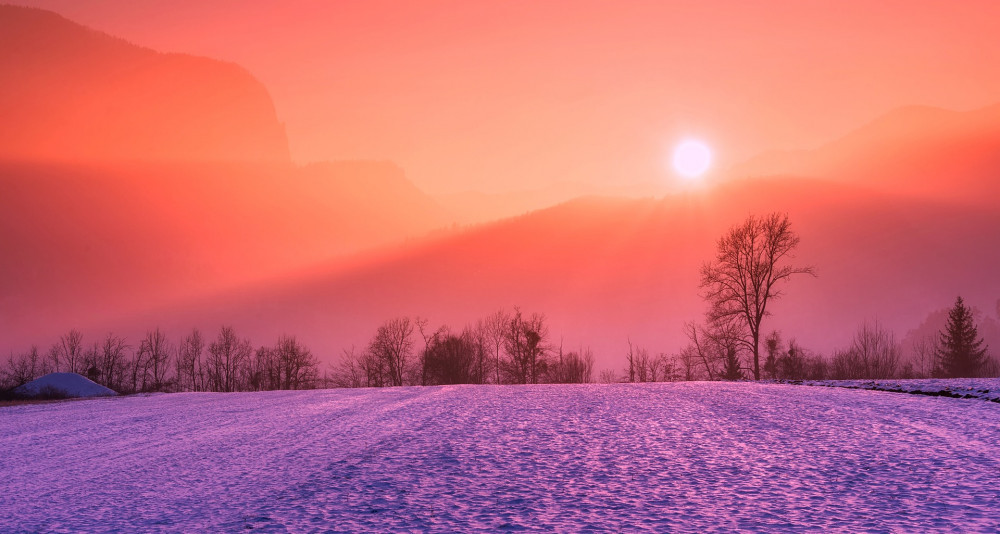 I think that some of my continued connection to the Prairies was never more apparent to me, when in 2009 I actually left the Prairies and moved out East to Ontario.  A complete departure for a girl who had never lived outside of the Province of Saskatchewan in my entire life.

I lived in Ontario for 7 years.  Now don’t get me wrong, Ontario is an absolute beautiful place to live.  I still dream about Ontario and what an amazing place it is to live.  But, after 7 years away in 2016 I decided to move back to my hometown of Saskatoon.

Being away for that long, was really such an amazing adventure, that I am so proud to have had.  I wouldn’t change that time for anything.   I got to see so many new places and exciting experiences that I would never have had if I had stayed living in Saskatchewan. 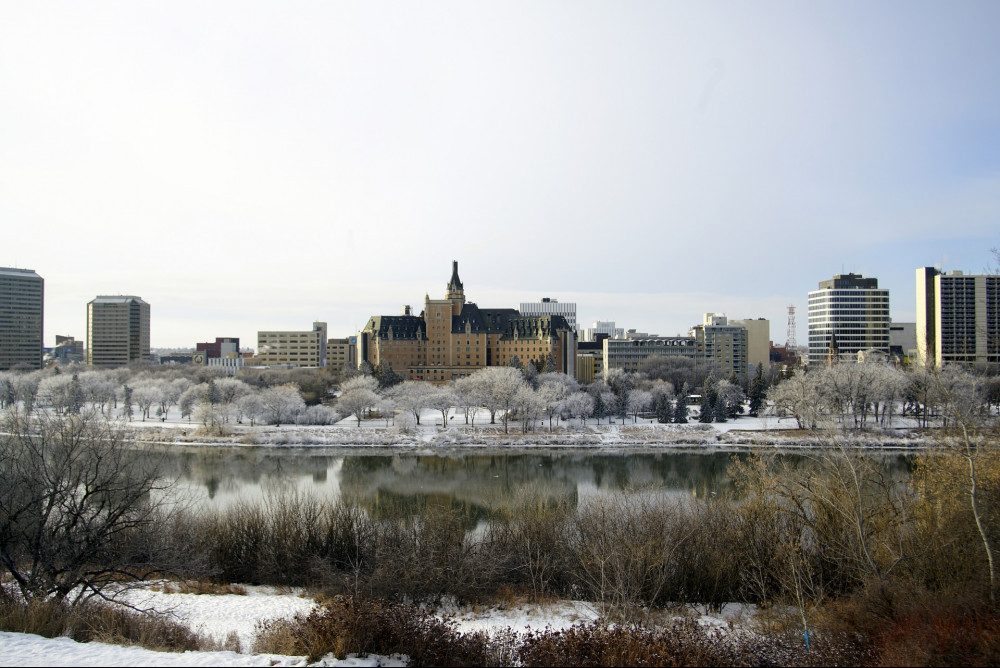 People always say that there is just something about where you are from, and I never really got it, until then.  When I think about the reason why I moved back, it is best described as a pull.  What do I mean by that?  I got a feeling that told me I just wasn’t quite done with living the life of a Prairie girl.  Almost all the people I had known my whole life were all still living here.

It isn’t just one sentence that you can say describes what a prairie girl is.  For me it’s the -40 C winter day sitting OUTSIDE to watch a University Football game.  Camping in May when a snow blizzard hits is also pretty common.  Its watching hockey and drinking beer with friends on a patio.  There are many activities and things that are just part of life here.

I also think that it boils down to a state of mind.  Everywhere you need to go when you live here is a commitment, there are no quick trips anywhere.  Think long highways that all look exactly same with no end in sight.  I always joke that if equipped, you could put your car on auto pilot and sit back.  The highways are often so straight you don’t even have to touch the steering wheel.

We love to drink beer, have fun, and of course watch hockey.  That part of the story is pretty predictable, but whatever anyone says about the Prairies, is it definitely one place that everyone should come and see at some point in their life.  The people are amazing, and the landscape is unlike anywhere else. 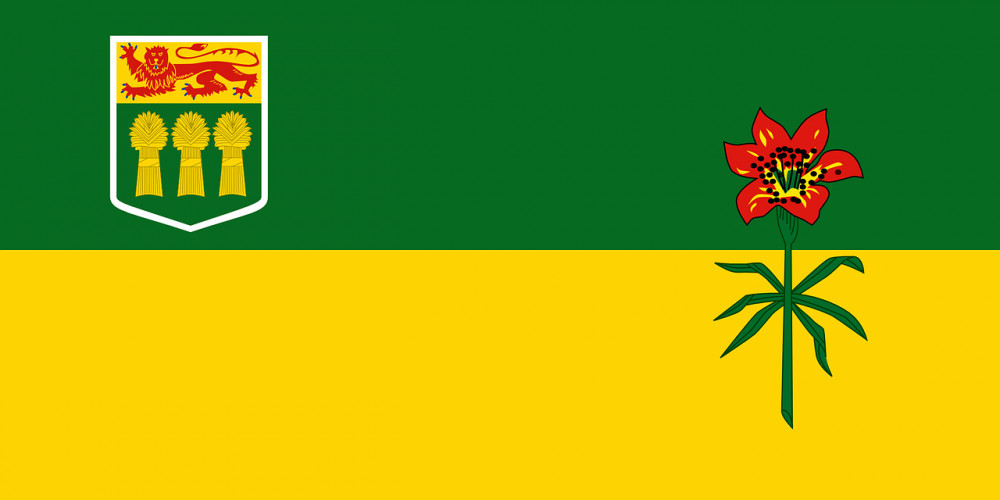 Don’t just take my word for it!

The famous Joni Mitchell is herself a self proclaimed Prairie Girl, in 2005 she released a musical compilation called “Songs of a Prairie Girl”.  She too still has that connection to her hometown of Saskatoon.

So whether you are a famous prairie girl, or not, this place sticks with you and is just a part of you.  It certainly is for me.

4 thoughts on “What’s A Prairie Girl | My Prairie Story”

We use cookies to ensure that we give you the best experience on our website. If you continue to use this site we will assume that you are happy with it.OkNoPrivacy policy